Why we all need someone to believe in us… 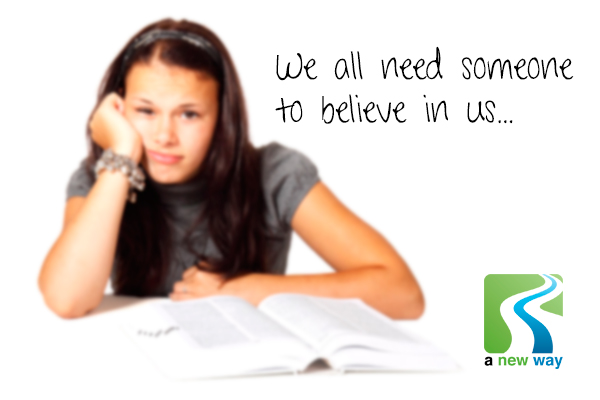 People often ask me what I do for a living, but trying to explain the essence of what I do in mere words can be very difficult. If I really put my mind to it, then I reckon eight words will just about do cover it:  “I make a difference; I change people’s lives”.

There are probably very few people in the world who can hand on heart say that they have a job that they really love and I consider myself to be very lucky to fit into that category.

It seems unlikely that doing what I do is ever going to make me rich, enable me to own a Porsche or live in a big house. Do I mind? Not at all! What I gain from my work is much more precious than having a lot of money or owing mere possessions.

I work with dyslexic individuals of all ages. Each dyslexic is unique and what one person will struggle with, another won’t. What they do all have in common is the way they are treated by an education system that fails to understand how they think and see the world, or to teach them in a way that they learn. The same system is often to blame for the way dyslexics are made to feel and think about themselves.

One of my favourite quotations is an old Native American saying: ‘Never judge a man until you have walked a mile in his moccasins’. For someone who has never experienced dyslexia, trying to start to comprehend what it is like to struggle every day of your life with tasks that others find easy, can be very difficult to understand.

For those of you reading this that have first-hand experience of being dyslexic, or have a dyslexic child or loved one, then you will know exactly what I mean. You will have no doubt experienced the heartbreak of having to watch your child slowly lose their self-confidence; the tears, anger and frustration as they start to believe that they really are stupid or unintelligent. For some the miseries of not being able to read, write, spell or do maths like everyone else can become all consuming, which not only has an effect on the person, but the rest of the family as well.

Children often retreat into becoming the quiet one who hides at the back of the classroom, hoping that they are not picked upon to stand up and read aloud in class, fearing the humiliation and embarrassment that might cause. For others, being the class clown is the solution, reckoning that if they are going to be laughed at, then saying or doing something funny will mean they are being laughed at because they chose to make it happen.

Of course there is always the ‘I am not going to do it’ remedy. After all, if I don’t do something, then I won’t fail at it. It’s far better to get into trouble for refusing to do something, then failing or having to admit they can’t do it. The child that resorts to the last solution is often labelled as having ‘behavioural problems’. I pray for the day when someone actually takes the time to find out the real reason why a child feels they need to behave like this, rather than just labelling them as badly behaved or disruptive.

Of course all of the above applies equally to dyslexic adults. I have met many grown-ups, some of them considered to be high-flyers who have spent a lifetime trying to hide what they perceive to be their failings. The relief when they meet someone like me who really understands what they have gone through can at times be too much. Often, much to their embarrassment, they dissolve into tears and we both end up having a quick sob before regaining our composure.

Of course it does not have to be like this. With the right type of help, then anyone, whatever their age can be shown how to read fluently, write, spell and to become competent in maths. For me this is the easy part. The hard part is trying to get someone who has lost all their confidence in their abilities to believe that they really can do all of those things.

When working with a client, then I ensure they are treated with respect, their views and ideas are valued, whatever their age, but my main focus is to show them that I truly believe in them and what they are capable of achieving.

A good example of why this is so important is highlighted in an e-mail that I received recently. It was from the mother of a young man who wants desperately to become a police officer.

It doesn’t need further explanation, as the text says it all:

“I just wanted to let you know that Harry went for his day 1 assessment with the Met police last week and passed!!!!!! Yippeee! He has got a medical and fitness test next and providing he passes that, he then starts the PLC training course in March. He was able to do the written and numerical tests on the computer based on the information in your diagnostic report.

Thank you so much for all of your help; you were definitely the turning point for him. You gave him the confidence to understand that there was a reason for his struggle and that he was not as hopeless as he thought he was. He started to believe in himself and as a result went on and passed the tests.

I will keep you posted on his progress and hopefully someday soon, he will make it to become a Police Officer.

I have many examples like this, but my favourite was from a young girl who was 10 when I first starting working with her. Her first session was memorable because she was no nervous that she was sick all over my practice room. She soon got over her anxiety and has gone on to make remarkable progress, going from a non-reader to someone who has now read all of ‘The Diary of Wimpy Kid’ books.

Having completed her course, she went away with her ‘Words Manual’ to complete the 200 odd trigger words, (words which for dyslexics do not have picture or image associations). A couple of months ago I received a handwritten letter from her, telling me how she was getting on at secondary school. This was accompanied by her form signed by her mother confirming that she had indeed finished 150 words.

At the end of the form, the young lady in question had added in her own handwriting a short sentence that consisted of only 6 words. Those 6 words when I read them had me scurrying to the bathroom to have a quiet sob to myself. Even now when I recall them, they still bring a lump to my throat. So what did those 6 words say that had the effect of making a grown woman cry? Below is what she wrote:

‘Thank you for believing in me’.